So accurate it requires almost a year to complete, this is the officially licensed, roadworthy replica of the Batmobile featured in the iconic 1960s TV show.

Read more
For Personalized Service on this item please call 1-800-227-3528 and our Product Specialists will gladly answer all questions and provide additional information. Please note that special conditions and guarantee limitations apply to this product.
$200,000
Qty
Product Story

So accurate it requires almost a year to complete, this is the officially licensed, roadworthy replica of the Batmobile featured in the iconic 1960s TV show. Built on a custom Lincoln chassis, this crime-fighting cruiser comes standard with a 430-horsepower, 383 Blueprint Crate engine and a Monster TH350 automatic transmission. Though equipped with neither atomic batteries for power nor turbines for speed, a rear-facing propane tank creates the same afterburner effect as the original. The vehicle's cockpit honors the gadgetry of the TV series with a blinking Batphone, switch-operated electric actuators that open the hood and trunk, and a rotating red beacon to alert citizens while in pursuit of fiendish criminals. Other intriguing, if less functional, accessories include a glowing detect-a-scope screen, a Batbeam ray that raises from a hood-mounted antenna, and empty rear parachute packs. The vehicle's exterior bears all the hallmarks of its namesake, from bubble-canopy windshields to chrome "rocket" tubes behind the rear windshield. Though the original Batmobile lacked rearview mirrors, this street-legal model comes with clamp-on side mirrors as well as a rear video camera. Special conditions and guarantee limitations apply. Batman and all related characters, vehicles, props, symbols, and other Batman elements, are trademarks and copyrights of DC Comics. 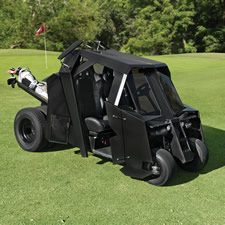 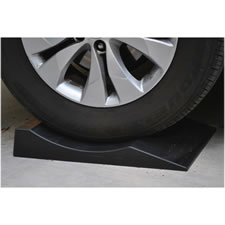 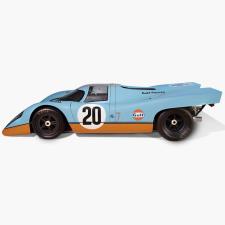 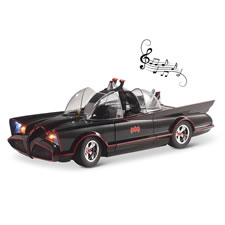 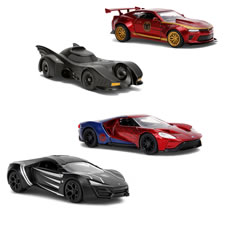 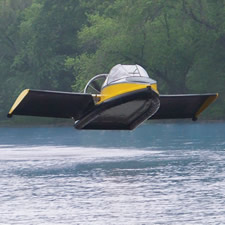