A Day To Remember And Celebrate 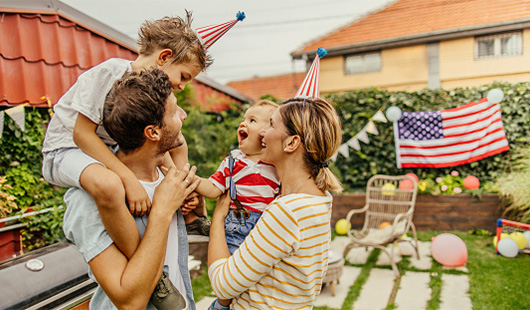 Originally named Decoration Day following the Civil War, Memorial Day became a federal holiday in 1971. The sacred day honors fallen men and women of the United States Armed Forces and is often observed by visiting memorials of our nation's heroes as well as holding get-togethers with family and friends. Observed the last Monday in May, it is also considered to be the unofficial beginning of summer.

A thoughtful way to honor a loved one who had served is with items that commemorate their sacrifice such as The U.S. Military Branch Medallion Flag Case. This classic case holds a 13-fold United States flag and has a medallion mounted on the front that displays the emblem of the Marines, Army, Navy, or Air force. Patriotic symbols such as star and stripes or decorations like The 6' Patriotic Fireworks Flag are also a traditional way to celebrate America and its service members. Available exclusively from Hammacher Schlemmer, the 6'-tall inflatable U.S. flag generates a simulated firework show emanating from its center.

In addition to honoring America's heroes, many take the three-day Memorial Day weekend as an opportunity to enjoy parties and backyard barbecues. At Hammacher Schlemmer, we pride ourselves on providing these superior hosts with classic BBQ essentials such as The Kamado Style Ceramic Grill. Using lump charcoal and radiant heat, it evenly cooks your favorite summer foods. Unlike metal grills that allow heat to escape through the walls, the kamado’s ceramic construction retains virtually all of the internal heat—reducing cooking times. For smaller get-togethers such as at a park or on a boat, The Portable Picnic Grill folds up like a suitcase for easy transport. Constructed from cast aluminum that resists corrosion, it unfolds into two 11 1/2" W x 7 3/4" D grills each with its own charcoal pit—providing the capacity for up to eight burgers or 16 lamb skewers.

Hammacher Schlemmer also carries a variety of grilling equipment designed to make cooking outdoors cleaner, safer, and easier. Items such as The Perfect Meat Thermometer help ensure a perfect level of doneness while exclusive products such as The Extreme Heat Resistant Grill Gloves helps keep your hands and arms protected from the heat of an open flame. Other products such as The Grillzebo protects an outdoor grill from the sun, rain, and snow as you cook while accessories like The Brighter BBQ Grill Light enable you to keep on cooking all through the night!

Whichever way you choose to celebrate the holiday—take some time and reflect on all those who made the ultimate sacrifice, defending the unique gifts of freedom and democracy.